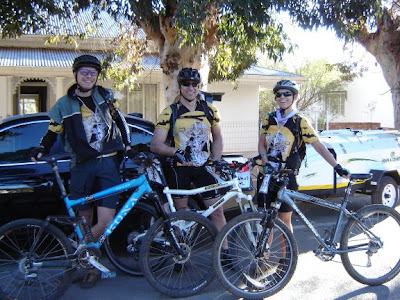 One of the favourite teams to win this year's Trans-Baviaans challenge, a gruelling mountain bike race over 230 km, transitioned a sure podium-position away last weekend when they spent too much time in transitions socialising, eating and sleeping. The team spent about the same amount of time at checkpoints, as other teams took to finish the whole race, reports our correspondent from the Eastern Cape.

Team Dark & Dirty, who entered their third team due to all kinds of excuses from the first and second teams, were the favourites to win the competition, mainly because of all the publicity that their small & loony group of writers, riders and photographers enjoyed over the last few months.

The transitionally challenged team started the race with a mad sprint over the flattish and sometimes even downhill-part of the route. Jan Dekker was seen spinning like a yo-yo at a cadence approaching 300 revs per minute to keep up with team captain Hans Wolfaardt's crazy pace. Team Dark & Dirty were among the first 50 teams to arrive at checkpoint 1. 'I went quite fast', was all that Dekker had to say as he tucked into the hotdogs and coffee provided at the checkpoint.

No team could overtake Team Dark & Dirty when they were on their bicycles, averaging about 19 km/h over the total distance. Speed and fame, unfortunately, were not enough to win them glory, the team found out in the early hours of Sunday morning.

The team's original goal was to finish in 20 hours, and ahead of team Bloukous and Team Brother-In-Law. The tailwind and dry weather made for perfect riding conditions, and it soon became clear that neither the 20 hours, nor any other team (with a teamname starting with B) posed any threat to the Dark goals of the Dirty team.

From the first checkpoint, the team were a clear favourite among the checkpoint-staff, opposition team support teams, and paramedics. A paramedic at checkpoint 4 ascribed the team's popularity to the fact that they stopped and socialised with everyone at every checkpoint, instead of just racing past like other teams of their calibre. Team Dark & Dirty stayed in the first transition for more hotdogs, more coffee, and then sat down watching teams come and go, lubing their bums, lubing their bicycles, and thinking up all kinds of other excuses to postpone leaving the checkpoint. When they finally did leave, it was a mad dash to catch up with teams that passed them while they were transitioning. By the second transition the pattern of 'cycle hard, transition hard' that the team would follow through-out the race, was already firmly established.

The hardtail-unfriendly surface, freeride-bike-unfriendly hills, long fun downhills, more long fun downhills, gruesome climbs and stealth-mode riding by starlight, all contributed to the sore bums that would haunt the team from the first checkpoint. Dekker almost caused a riot in the team when he suggested that the reason for sore bums might be too much chocolate brownies.

When the race-pace became too hot on one of the rare occasions that the team could be found actually ON their bicycles, Carine Reyneke tried to wear her team mates out by discovering a puncture right at the top of a downhill, causing the ever-energetic team mates who waited in vain at the bottom, to climb the hill again to come to her aid.
When that didn't seem to slow the team down, she tried an old trick by breaking her seat post. Dark & Dirty Dispatch Readers will remember that she tried that very same trick a few months ago during the Sabie Shenanigans, causing Dekker much pain and grief to try and fix it, while she was taking a much-needed rest. This time, however, Dekker was ready for the onslaught: no sooner had the team been made aware of the broken saddle, or he was found lying sleeping next to the road, with gloves tucked in on both sides of his helmet to shut out lights from passing cars and bicycles, leaving Wolfaardt to take care of the mechanical breakdown.

Official investigations are still underway, but a preliminary report reveals several possible reasons for the long transitions that costed the team their race.

The perfect weather could have played a role in the team's reluctance to get out of the watering holes. 'In foul weather, a team might want to get on their bicycles and get the race over with, but the sunshine & tailwind might have reminded the cyclists of lazy Sunday-afternoons on thick grass under big trees', a paramedic explained.
Wolfaardt blamed the transition-disability on the changed menus. Racers were promised boring potatoes, but were offered braaivleis, potato salad and sosaties instead. At another transition they were promised coffee, but got harassed with cream-and-syrup-spiked hot chocolate, chocolate muffins and garlic rolls. 'I mean, what was the organiser thinking - it was more like a spud-crawl than a cycle-race', Wolfaardt was heard muttering to his team mates. 'How did the race organisers expect us to cycle after that? Being all sleepy like after a Sunday lunch & everything?' Official complaints will be lodged with the race organiser.

'We tried not to transition longer than we took to cycle the previous leg, but that was not always possible', Dekker was heard saying after a two-hour-long transition at checkpoint 5. (The cycle-leg prior to that checkpoint took them a mere 90 minutes.)
At checkpoint 6, the team finally found a way to keep Dekker from falling asleep at transitions when Wolfaardt devised a cunning plan that involved getting an innocent bystander to admire Dekker's bicycle and start discussing freeriding. This plan, however, also had its challenges, because neither Dekker nor the innocent bystander was prepared to leave the checkpoint before the necessary exchange of contact details.

Wolfaardt calculated that the team could change the 24-hour-event into a staged race by combining the time spent at each transition, and rather make a proper transition-area out of one of the transitions. 'We could pitch tents and sleep in proper sleeping bags', Wolfaardt proposed excitedly. Fears now exist that other teams will catch on with this trend, changing the Trans Baviaans into a multi-staged event and thereby robbing if of its status as the world's longest single-stage race.

One possible reason for Dekker's reluctance to wake up and get onto his bicycle after checkpoints was discovered after the race when Reyneke tried to move Dekker's backpack. It weighed about 70 kg's and help had to be called in to move the pack 2 metres to make space to sit.

Dekker was not available for comment.
Posted by Carine at 5:41 PM 0 comments

Email ThisBlogThis!Share to TwitterShare to FacebookShare to Pinterest
Labels: baviaanskloof

Having never seen a "North shore-bridge", I had no idea what the organiser (and everyone else) was on about at the Sudwala pre-ride briefing. The sparkle and excitement in my freerider-buddies' eyes hinted that it might be technical stuff far above my or my bike's ability. The promised "chicken-runs" didn't put me at ease in the slightest - I remembered only too well that the so-called "chicken runs" at the downhill-competition the day after the Induna were still very much higher-grade.
The organiser spoke about single track and drop-offs, downhills & obstacles & bridges, North shore-style.

Yeah right. We started on dirt-road, did a quick loop through a tunnel, and then onto a never-ending climb - on tar. At the top of the tar-hill, we at last left the tar and continued the climb up a rutted jeep-track. Finally there was a water point, an Argustour-vibe and a downhill. The downhill didn't last long, though. But the next hill was short, and finally we were in a forest. The single track twisted and turned and I missed it a few times DeeKay-style. Then there was a piece of single track that looked like it was made a few days before - which is likely, due to last minute route-changes because of the fires that raged the area. The path was against a steep slope and you had to tackle it fast so that, by the time the earth disappears beneath your back wheel, you'll be over that patch already. Unfortunately there was a bottleneck - like sometimes happen on these juicy bits. People haven't heard of the 'speed can cure almost any obstacle'-theory yet. Finally the newly created track sloped downwards, and then joined with something out of this world - we were inside a mini-canyon with a play park of bridges, twists, turns, and more bridges. Once or twice I accidentally took the chicken-run (I'm still learning to look further ahead) and had to turn back so that I could attempt the real thing. Once or twice I was in the real thing before realising it, and it was too late to stop so I just had to continue - wow!

The rest of the route followed the same pattern: climbing on (sometimes very steep) rutted jeep-tracks and bombing down deep kloofs with twists & turns & rocks & bridges & broken bridges (deliberately, I suspect, because the wood seemed quite new) and very narrow bridges and very long bridges and bridges that turned in mid-air and bridges built at strange angles and steep turns that would throw your bicycle up against the track-wall, and drop-offs with low tree-branches that would grab your camel-back just as you cleared the drop-off or the obstacle. There were a few hair raising moments when I overestimated the angle of a bridge over a fence, and caught some air right at the top of the upside-down V-bridge...I would have been out of the race if the mountain bike-goddess didn't show some mercy & guided my wheels to a soft landing straight back on the bridge. There was some more climbing, and more bombing down into some or other technical heaven, then some waiting for a chance to pass who-ever's in front of you, and then another climb, where the slow-single-track-people would outclimb you again, another downhill and sometimes another bottleneck.

Every few kilometers you would hear a big noise, and a few 100 meters later the water point would come into sight - with loudspeakers & pom-pom girls cheering you on - the vibe was great & I felt like a champion as they cheered me into & out of each water point.

It's almost a week after the race and I still walking around with this stupid grin.

There's just one thing that this race doesn't have: ski lifts to the top of the many climbs. I guess I'll just have to learn to climb, so that I can avoid the bottlenecks by reaching the single track first.

Note to free riders, duallie-riders, Dark & Dirty-riders and other Mountain Bikers:
A girl on a hard tail wrote this report, and 'technical' for her is nothing special for anyone else. Not worth going to Nelspruit for this ride.
Note to roadie riders:
This ride is far too technical and you won't like it one bit. Don't take your MTB there for it's annual getaway. You might fall and bruise yourself - and we don't want you to walk around with a grin for a week after the ride and then convert to MTB.
Posted by Carine at 5:39 PM 0 comments