Prelude
'Are we gonna do it?', Pablo asked.

'We might as well', came the answer from G-man without even thinking about it.
I was already entered for the Transbaviaans the next weekend, and it's probably not the wisest thing to do two sleep-deprived xtreme-ish events two weekends in a row. But the 10'th SwaziXtreme was also going to be the last, and I had some unfinished business with that race. When Theuns chose Kilimanjaro above racing with his favourite team, we roped Mummy-man in. G-man's sister and brother-in-law was going to be the seconds.
But 2 days before race-day the seconds' kid landed himself on a drip in hospital, and we were frantically searching for last-minute seconds. At 18:00 on 5 August, the day before we left, we were still  Secondless in Swaziland and making all kinds of plans to second ourselves. By some miracle we sourced 2 lastminute seconds that seemed very willing (and even eager) to be our slaves for the weekend. One of them still had to collect his passport the next morning ... but the race was on.
Anyway ... so we got at the race venue long after dark. Excellent feast that Darron organised for us ... then race briefing. It was gonna be a long 3 days. Did we train anough? oh well - too late now. We decided to only go for the compulsory points and take the 2-hour penalty for missing the optionals  - to try make the distance more doable.
Day 1
Hike about 10 kays
Cycle about - 60? (i'm making this up - can't really remember)
Paddle about 15 kays on a canal; includes a 21-point turn to get into the flume
Hike 8 kays
<sport people go to bed, pro people continue>
Hike 20 kays
Bike 70 kays
Race started 6 on Friday morning. Was great to see so many familiar faces out there: the D&D team of oupa Gerrit & Brendan, team Bad Medicine, Lickety Split. The stronger teams collected OPs while we went for CPs only, so we were fortunate to see teams like Jabberwock out there!
Here's Pablo carrying his bike over the last obstacle just before the paddle - G-man rode some of this, but he was in front of me so i couldn't get a pic of him - for some or other reason Mummy-man and Pablo refused to ride it. 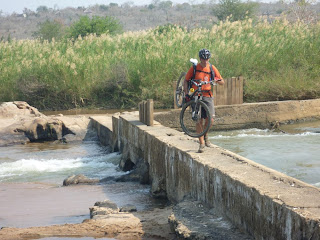 At the start of the night-hike we took a wrong route, so decided to use an aardvark-hole to get under the electrical fence, rather than going back the 1k. Here's Mummy beneath the fence with G-man and P keeping him away from the shocking part of the fence. 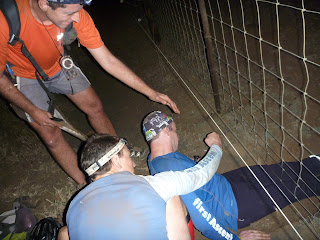 There were lots of warnings about hippos and crocs - Red Ants caught us while we were taking this picture - we kept up with them for about a kay - then their lights disappeared in the distance. 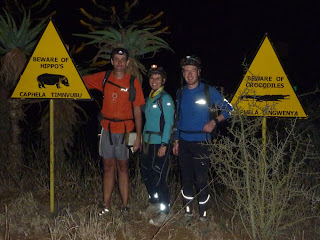 We hiked for a very long time, then climbed a mountain and hiked some more. Finally got to the bikes. The seconds left some cheesies and a packet of biscuits with the bikes - much appreciated and quickly devoured. We tackled the downhills - but the sleepmonster attacked me badly, so I don't remember much of this. We did sleep for 10 minutes or so, i think. 'Twas daylight by the time we reached the camp again. Requested breakfast from the seconds before we quickly collected the last MTB CP for this leg  (while other teams were still discussing where it should be) and then tucked into bacon and eggs. We started day2 about 2 hours late.
Day 2
Cycle about 10k very scenic, flat and on mostly singletrack - yaay
River paddle about 20 kays with crocodiles, rapids and a few swims
Hike 20 kays in the rain and most of it in the dark - but it felt like 50 kays
<sport people go to bed, pro people continue>
<pro lite people decide to skip the night-bike and night-hike in the rain, and rather get some sleep>
The first cycle to the river-put-in was very enjoyable. the sun was up, the sleepmonsters gone and the eggs & bacon went down well.
River paddle was great!
The boat was heavy, so the portages was tiring. We fell out a few times, and seemed to be a sandbank-magnet - but a very enjoyable paddle. Met up with team Numa Optics who had a shoulder-incident in one of the rapids - we were exchanging names, contact details and painkillers when the race helicopter noticed the patient under the space blanket, so we could leave the scene and fall out of our boats again.
A short rest, then onto the hiking leg. A very pretty rainbow and dark skies warned of a wet night. Soon it was night again. Sleepmonsters came out again, but there was no chance of powernap - we had to keep moving to keep warm. A convoy of seconding vehicles past us with the bad news that the transition was still 8 kays away. It felt like 20.
We finally arrived to a hot potato-and-mince-meal prepared by the lastminute-seconds. Yum. Chocolates, and then decision-making-time: do we want to go mtb, then hike, be out there in the rain all night .... or maybe do the sport-thing and sleep. We opted for sleep. Heinrich and Handsome drove to where the next campsite would have been and pitched camp. Too soon it was morning - the 3rd day.
Day 3
hike 20 kays
bike 80 kays - how hard could this be? <We were about to find out>
To soon it was the morning of day 3. Having not done 2 of the pro legs, we were now on the SwaziX Pro Lite course. Here we arrive on a soccerfield - not much navigational skills needed here, we were escorted to the point. 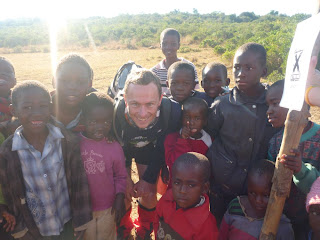 A beautiful hike with some spot-on navigation by Pablo and G-man - we even managed to collect quite a lot of optional points :)  Hre they're discussing one of the more interesting options. 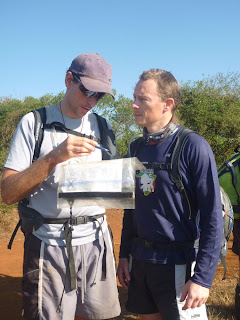 Then we went down into the kloof - here's g-man on one of the more technical descents: 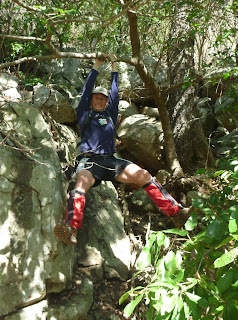 We waited for a long time at the jumar - about 3 hours. Could have caught some sleep - but it was daylight and we didn't feel any need after last night's 4 hours. Here's the gigima-guys checking out the girls on the jumar 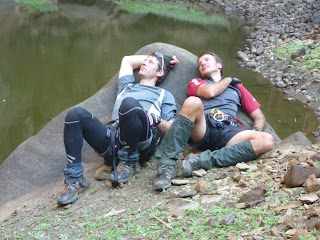 A quick jump in a dirty rock-pool, a very pretty hike out of the kloof, and we reached the transition before sunset. Heinrich & Handsome had a hot meal ready.
Here's Handsome in his seconding outfit - we never saw the pompom-dance, though, cos we arrived too late 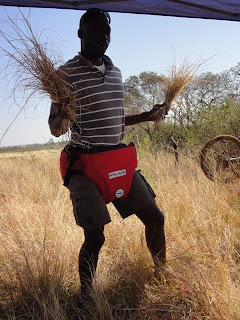 We fitted lights. Navigation was going to become much more difficult with roads that aren't on the map, road on the map that dont' exist anymore, and villages where there were nothing 20 years ago when the map was printed.
So off we went. Some excellent navigation from G-man to find the first control that was blown over by the wind. Then down a very technical rocky descent that the Trance kind of didn't want to ride. Saw Red Ants briefly. Then up on the other side, equally rocky and technical - so we had to carry the bikes up (I practised a bit of this on Lehanna on Ride2Rhodes last year). More excellent navigation from Gman for the next control. Finally out of the gorge, met up with Alex (Cipralex), then onto more ridable roads. The rest of the night is a blur - we might have slept once or twice for 10 minutes at a time. At some stage I became aware of light again - it was the 4th morning.
Day 4
Actually, this was still part of day 3. But the sun was up, we were on cattletracks and it was a beautiful day. We were tired and our feet were swollen in protest to the abuse of the last 3 days, but the map looked up - no more hike&bikes and no more deep gorges. Sometime during the morning P got had to fix a puncture. Here we are taking a break just before we discovered the puncture - kind of tired. 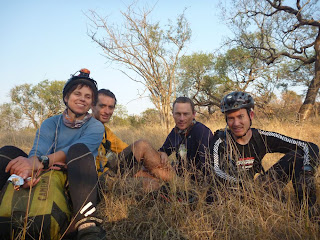 Red Ants and Cipralex caught us about here - we did see them a few more times before they disappeared off into the distance. Then we disappeared into the distance too - it was such a good sight to see the finish venue!!!!
Epilogue
We had to pack & leave immediately to try catch G-man's flight back to C-town. The seconds drove us back - none of us were in a state to drive. We missed the flight anyway :(
Posted by Carine at 8:40 PM